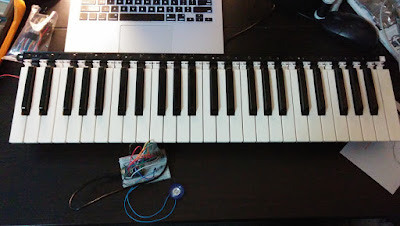 Recently, my father in law donated an old electronic piano keyboard for me and my son to play around with, an old Yamaha PSR 8 from the 1990s. When we brought it home, my son accidentally pulled off the tip of the 9V DC adaptor that came with it and when I plugged it back on I got the polarity wrong and we broke it (sad face). Yah, I know, I know ... I got lazy and thought I definitely had it the right way (who knew there was no standard for the polarity of DC power pack tips? Now I do) ... will always check with the multimeter from now on.

So I opened up the case and had a peak around. Can't see any obvious physical damage (no burnt out or broken components). Had a search online for some repair manuals for this keyboard and found a few pages, but to be honest wasn't that keen on trying to find replacements parts. So ... only one thing left to do: gut it and rebuild the electronics again from scratch! 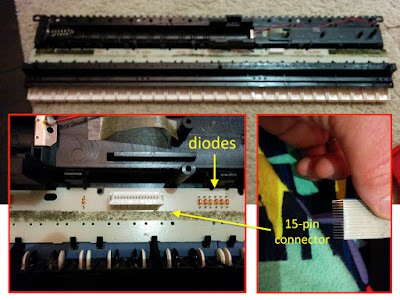 I unscrewed and pulled away the actual keyboard assembly from the rest of the case. Had a look at the keyboard itself and contacts for keys. Running along the back of the keys is a single long PCB with contacts for each key and a bunch of diodes on it (one for each of the 49 keys) that all map back to a 15 pin connector. A bit of googling and it looks like this is a switch matrix. I found this helpful reference which seems to explain how this circuit works: keys are grouped into nine rows, each with a set of six keys (except for the last row which contains a single key), where each key in a row shares a common ground, and the first pin of each row shares a common contact on the other end of a diode, as does all the second pins etc. The state of each of the 49 keys can be read by selectively reading from 6 digital input pins while incrementally setting 9 output pins to ground one at a time. 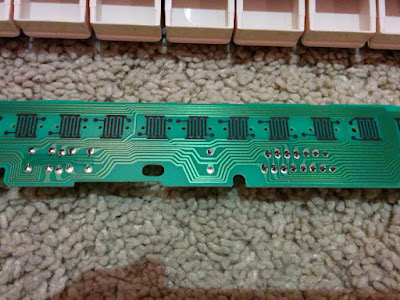 I decided to use my Teensy 3.2, which I hadn't previously used, to do the reading of keyboard state. I installed the teensyduino add on for Arduino 1.6.11, tested out an LED blink code and got a 4 ohm speaker working with simple melody. I then got a simple, single switch working with a INPUT_PULLUP mode, all good, lighting up pin 13 LED. Then I wrote a sketch to flick back and forward between two pins, both in INPUT_PULLUP mode and to a common ground, by setting the other pin OUTPUT/HIGH while reading the other (diodes built into the keyboard to stop current pulling between pins when both keys are down). Working well. 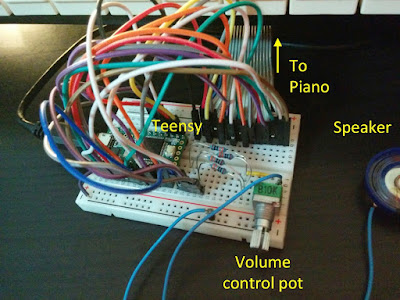 I snipped and stripped the ribbon cable I found connected to the 15 pin connector coming off the key switch PCB, plugged it into my breadboard and connected to 15 digital pins on the Teensy. I wrote a sketch to implement a basic matrix to read out all 49 keys. I found I had to add in a 10 us delay between setting Teensy pins to INPUT_PULLUP mode and reading them (as suggested by the Teensy instructions on their website) and also found I had to add a 50us delay between subsequent reads of each key on the matrix to get things to work such that more than one key could be read at a time. Once all keys read, wrote a program to output the tone corresponding to the highest key. Basic monophonic piano implemented!

I decided to round off this design my modifying the Teensy built in tone function to produce four simultaneous tones using the 4 PIT timers available. I modified the standard Teensy tone implementation to use up to four timers simultaneously and prioritised timers to the higher keys on the piano. I used four pins each connected through a 330 ohm resistor back to the speaker and I also chucked on a potentiometer for volume control. Working fine, and I could now play polyphonic tunes pretty well (up to four simultaneous key presses). The square waves sounded pretty ordinary through the little 4 ohm/500mW speaker, so I also tried connecting the ends to an RCA co-axial cable and plugging it into an external amplifier, which was a little better.

The code for running this all can be found at:
https://github.com/mit-mit-randomprojectlab/keyboard_multitone

At this point I decided to try an alternative direction for the design: instead of doing the sound synthesis on the Teensy, what if I used an additional computer or micro to do it for me? I decided to try and get the keyboard working as a MIDI device. I changed the code to output MIDI "noteon" and "noteoff" messages on key presses and configured the teensy to output MIDI, using the options available in the Arduino IDE. The teensy library in teensyduino makes this very easy: there are a bunch of send/receive midi functions built in, no need for any additional code or external libraries.

The code for running this all can be found at:
https://github.com/mit-mit-randomprojectlab/keyboard_midi001

Once i got the keyboard working as a MIDI device, I downloaded and installed "Fluidsynth" on my macbook to read in the MIDI messages and play sounds. I used the "General User GS v1.47" font by S. Christian Collins and started up Fluidsynth from the command line using the following settings: ./fluidsynth GeneralUser_GS_v1.47.sf2  -o midi.driver="coremidi" -o audio.driver="coreaudio"
I then used a software package called "MIDI Patchbay" to patch the output from the Teensy to Fluidsynth, and voila! I can play synthesised piano through my laptop. Once in fluidsynth, I used "prog <channel> <inst>" to set different instruments.

So thus far I've managed to (a) make a simple synth (square waves) which is OK, but lets face it, my son will only find squares waves interesting for a short amount of time! and (b) make a MIDI keyboard, which can play all sorts of cool sounds, but only when connected to and setup on my laptop, so my son can't really go and turn it on and play himself. I am going to try and keep going down both design routes and (a) get a synth working on the teensy that can play a wider variety of tones/waveforms and (b) try connecting the MIDI keyboard up to a dedicated raspberry pi for doing the audio synthesis. Stay tuned!