PyWeek 25: The Desert and the Sea

"The Desert and the Sea" was my solo entry for PyWeek 25 (April 2018), a twice yearly video game development competition that gets competitors to build a complete game from scratch in seven days using the python programming language. This competition's theme was "Two Worlds" and I made a 3D exploration and adventure game set across two parallel worlds connected via a series of portals. 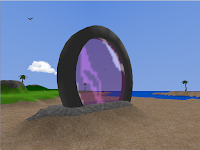 The game was inspired (sort of) by early 90s adventure games like Myst; there's a bit of exploration to do and some spatial puzzles built around teleportation and having to move between parallel worlds to by-pass obstacles that exist only in one world or the other. The game uses Pygame and PyOpenGL to produce it's first-person perspective graphics, and I was pretty happy with the final visuals and feel of the game. I spent a lot of time "world building" in this one, trying to use the visuals along with audio and music to create a nice atmosphere.

Although it wasn't my best entry in recent times, it still managed to narrowly win both the individual and overall winner for the comp with an overall score of 3.95/5.0, so I was pretty pleased :).


You can currently download the game as either a source release (works with Windows/OSX/Linux, but requires additional installations) or as a standalone Windows application (I'm still in the process of getting the standalone OSX version working):