This is part two (see part one) of a post on a custom-built Arduino-based synthesizer and keyboard called “Pentasynth”. Pentasynth uses a keyboard based on a five note pentatonic scale, so it’s easy to play for people with limited background in music (such as young kids) and encourages experimentation and improvisation. Pentasynth creates a user-selectable accompaniment including different drum patterns, bass lines and chord progressions and allows the user to play a pentatonic melody line over the top. Under the hood, Pentasynth runs on an Adafruit Metro Mini (using the same ATmega328 microcontroller as the Arduino Uno) and generates three channel audio (two square-wave tones and one pseudo-random noise drum beat), which is passed through and onboard amplifier and speaker, while simultaneously passing all outputs as MIDI messages via the USB for either a lo-fi or hi-fi audio experience. Pentasynth has controls for volume, tempo and selection of different accompaniment patterns. The keys and case components are 3D printed, with the main case panelling carved from clear acrylic using Carvey. Custom PCBs containing switches for detection of key presses were also carved on Carvey.

In the previous post, I discussed the hardware development of the keyboard including 3D printed keys and CNCed case and key switch PCBs, and the use of a wavetable synth for audio. I wasn't that happy with the audio quality from the wavetable synth, so I re-wrote my own system using hardware PWM square-waves for audio, with a bit of re-jigging to add MIDI output. I'll also discuss the electronics in a bit more details and the code running on the Arduino. 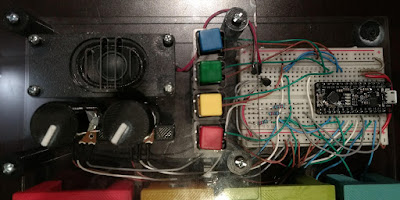 The ATmega328 has three hardware timers that can each be used to drive interrupt routines or run a hardware Pulse Width Modulation (PWM) signal. Since I wanted to keep the main program on the microcontroller free to managing key and control inputs and running an accompaniment system, the hardware timers were the only way to generate audio signals. By default, two of these timers (Timer 1 and 2) are unused, and the other (Timer 0) is set to run at 1kHz and controls functions such as millis() and delay(): any change in this frequency would mess with these. I've setup Timer 2 to run a square-wave output based on the note pressed on the keyboard and Timer 1 to run a square-wave from an accompaniment baseline. In order to get a pseudo random noise signal for a drum beat, I've piggy-backed an interrupt routine on the existing 1kHz to generate a pseudo random square-wave (i.e. randomly ordered series of LOW/HIGH) using a Galois linear feedback shift register (see this nifty little post). The random signal switched at 1kHz sounds a bit like a snare or open high-hat, so makes for a decent (lo-fi) beat. 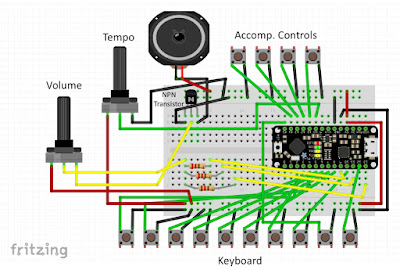 I ended up re-jigging the electronics to account for the changes in signal generation (I'm glad now I had left everything breadboarded on the final keyboard :) ). The three audio channels are generated as separate square-waves on three digital output lines (pins 9 and 11 on the metro mini, corresponding to the hardware PWM outputs) and pin 13 for the drum beat. The separate signals are then all connected together via 220 Ohm resistors to a potentiometer pin used for volume control. This output is then fed through a single NPN transistor, which is also connected the the 5V output, acting as an amplifier which is then connected to a 3W, 4 Ohm speaker. The ten keys and four control buttons are connected to the remaining digital input pins, and a second potentiometer connected to an analog input pin which is used as tempo control for the accompaniment.

In terms of code, the microcontroller polls the switches corresponding to each key and send the appropriate tone via both the audio output (hardware PWM) and a MIDI message. The code also implements an accompaniment system. This consists of a drum beat, base line pattern and four-step chord progression that runs along at the user selected tempo. The control button for each of the drums/bass/chord is used to cycle through the available patterns: the player can therefore experiment and choose a combination of drums, bass pattern and chord progression that they like and then improvise a melody over the top of this using the keys. A fourth control panel button is used to switch between different pentatonic modes (at this stage either a major or minor pentatonic scale).


The video shows the keyboard in action. My five year old son has been having fun playing around on it: I think he mostly likes that he can ramp the tempo up to crazy speed and mash the chord progression button to create havoc :).

The 3D models of printed parts and carvey SVG design files can be found here:
https://www.thingiverse.com/thing:2975555